Working 9.6 hours a week is about as good as it gets. Remainder of hours spent awake are divided randomly across a few things worthy of exposing to the internet.

1. Spend much too much time learning to make a pixel platformer which now morphs into an actionRPG (it is the next tutorial in the list) and then hopefully if I can manage it, one day… a RiverCityRansom-esque brawler, in a 90’s TacoBell.

I also made the little beer can, or what aims to be a beer can, its a tribute to “Natty Lite”, as this game will be set in a vague and very humid memory of Florida, and so, yes Natty it is. That said, I have not made it to the part where you can interact with any object, so its just stuck there for now…

Doing this by copying along to HeartBeast’s tutorials, very easy to follow along with if you have any inclination toward making something with Godot. 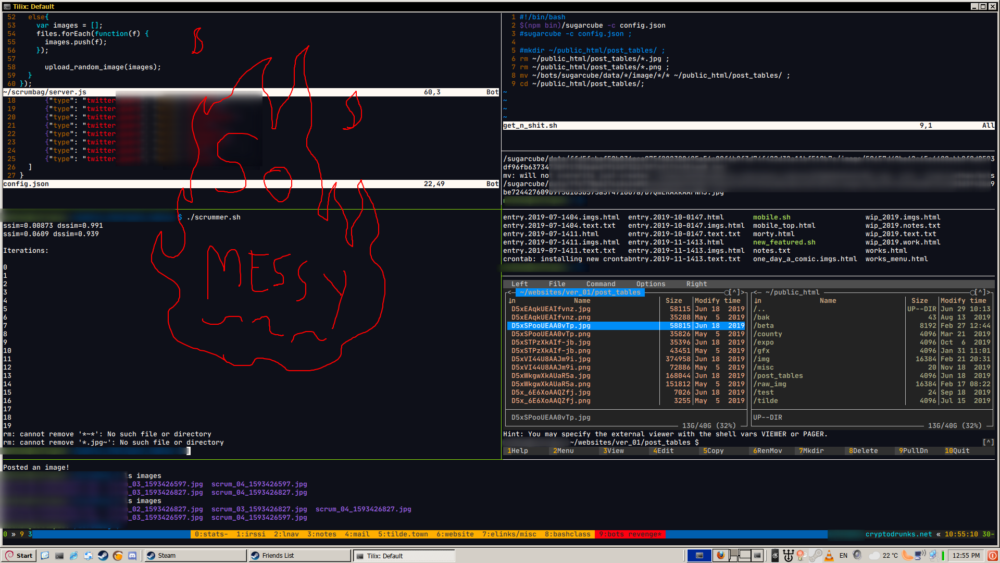 Return of the Glitching Wreckage.

I made this “glitch bot”, I wanna say… last year-ish probably, and it was good-ish for about an hour, than it got real stale like. I didn’t know how to really pull in some randomness. I think I could do a better job now, and that thinking is half the effort, it will require a day or so of work, but it could be something interesting and an excuse to sharpen skills which really aren’t even worthy of the knife metaphor in use there, more like continue effort to have knife like skills, right now butter is safe against these programming efforts.

Again it will improve, and bits of it will make it out to Twitter @nathanbuttercup

Are you still drawing those pictures?

– Yes. Yes, I am afraid I still am drawing “those pictures”.

Ah yes, the finest waste of time imaginable, if you think your identity is a bit lame now, and could use that air of prepackaged creative free spirit, grab your watercolors, pens and assorted mediums and become an ARTIST.

Trying to get back to this big one, the original “WIP_2020” I was so definitely going to make this year and have done on time and really for real just make a yearly pattern out of making such a piece.

And the new pencil work is progressing, not enough to be re-scanned, but enough for a solid lazy photo from my phone.

Sketching is better than reading the news in the morning.

Ok now for the rest.